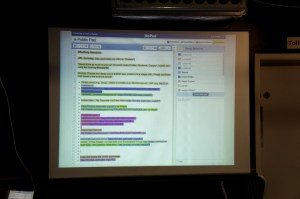 One of my data-sources is the set of etherpads which were used to write (mostly in small groups) a report. This data includes the final output (obviously) including some basic formatting, across which we could look for the presence of URLs and cue-phrases, etc. It also includes the whole revision history of each etherpad.

I’ve been looking around for some code to help me out, and to my surprise it appears (a) not much learning research has been done on such data (specifically using trace-data, rather than video, etc.) and (b) where research has been conducted, it’s with custom tools/code and not released.

From the academic side, from a quick look on google scholar (first 10 pages of ~30 + some citation following, note this probably excludes some google-docs & wiki related research and similar) I found a few interesting things:

And I’ve seen a few discussions in forums and plugin spaces:

So the third is probably worth a look in, and the 2nd one might be useful if the ‘spans’ of authorship colour are fully exported in the html (much easier to work with than the etherpad data structure).

Given the above bits of research, and thinking about (a) what etherpad records and (b) what sort of things we’re interested in for learning contexts, it’s interesting to consider what we’d want from an etherpad analytic tool.  E.g.

One thing I’m interested in, is just a very simple operationalisation in which:

What else might we want?  And does anyone know any (ideally easy, or implemented) ways to do any interesting things with such data?

Next Post: Welcome to the CIC Writing Analytics blog